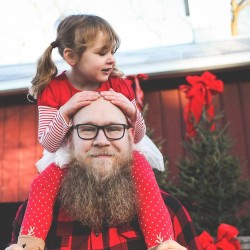 After a few days of using iTunes Match, the Music app, and Apple’s music ecosystem again, I’m kicking myself for not doing it sooner.

Tab bars. Good Lord do I miss tab bars. The hamburger has run it’s course. Facebook, Path, and many others have abandoned it. Why? Because all stats show that the tab bar is so much easier for the user. Because a slide out menu is without restriction, leading to Facebook having an endless list of options I don’t use and Path shoving notifications into it. A tab bar is restricted to 4-5 menu items. Want more? Apple offers a “More” option that allows the user to customize their tab bar to their liking. Me? I have Radio, Artists, Albums, and Playlists. This is how I access my music.

Also, I love how simple the design is. I have to say, I enjoy vanilla design. I do. There’s something to be said about straightforward, almost under-designed apps. The operating system sets forth a standard design style and the apps stick to it within 5-10%.

What does the Music app do that steps outside Apple’s standard? The Radio view is not a simple table.

And from the Player view, the track list is a really slick view utilizing the new blur effects really well.

But more than anything, I’m falling in love with music again. As I said last week, I moved away from Spotify because of the cost and because I wanted to own my music again. For Christmas I got a turntable and a couple of records. I only have a few records, which means that I’m playing the same thing with higher frequency. I’m getting to really listen to music. The intricacies of it. I’m getting to memorize lyrics again. And because my most frequently played records (Needtobreathe’s Rivers in the Wasteland and The Civil Wars’ self-titled album) came with digital downloads— which are synced to my phone with Match— I get to bring that music with me too, along with 400 other albums that I’ve purchased over the last decade.